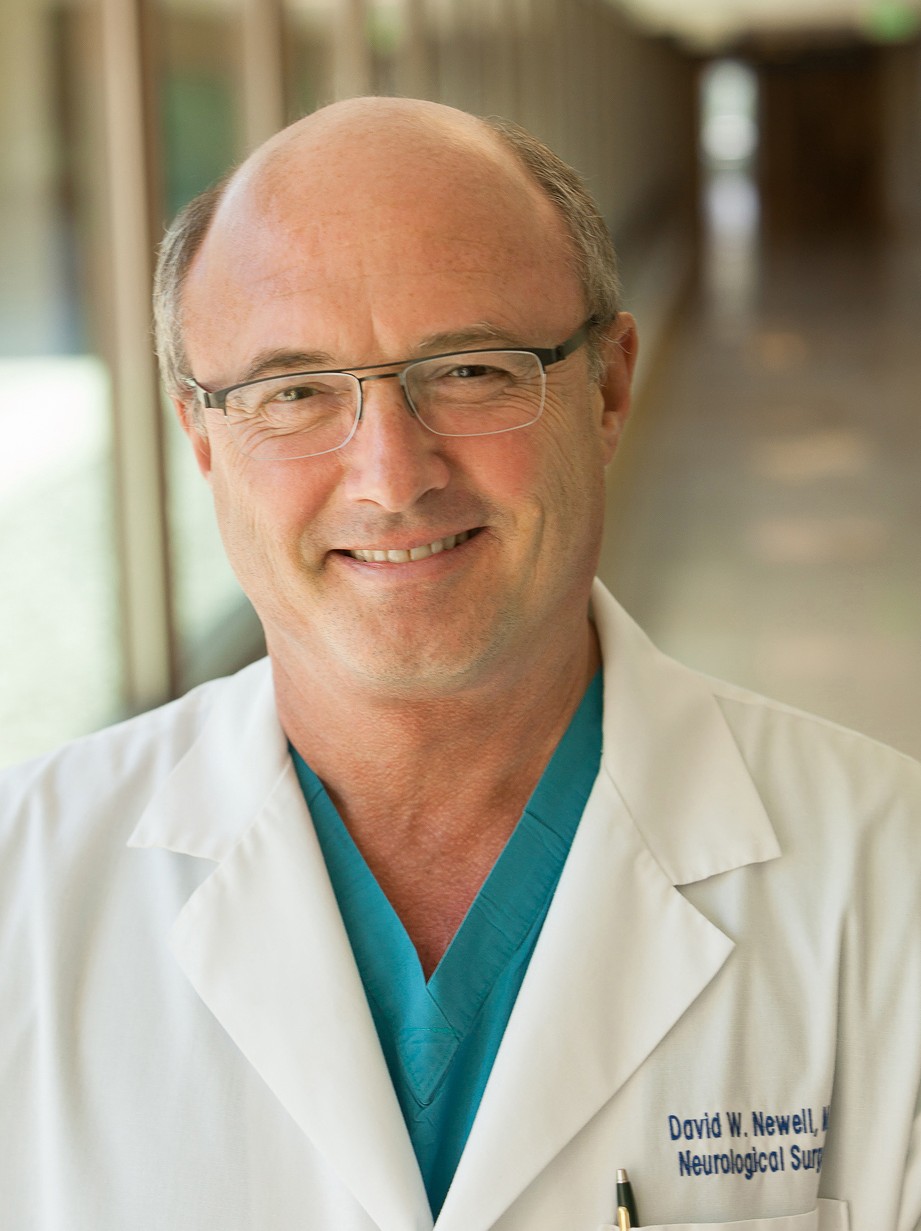 David W. Newell was born in Boston, Massachusetts. He received his undergraduate degree at Boston University in Biology in 1976. He then worked as a medical research assistant at Harvard Medical School in the laboratory of Dr George H.A. Clowes Jr., where he helped characterize factors in the blood that influenced protein breakdown in patients with severe infections. He obtained his medical degree from Case Western Reserve University in Cleveland, Ohio in 1982. He completed his residency in neurosurgery at the University of Washington in 1989 with Dr H Richard Winn, which included one year at Atkinson Morley’s Hospital and St George’s medical school in London, England. He was awarded the Van Wagenen fellowship by the American Association of Neurological Surgeons in 1989 and spent 1 year at the University of Bern, in Bern Switzerland with professor Hans J Reulen and Rune Aaslid developing a method to measure cerebral autoregulation ( the mechanism which allows the brain to adjust blood flow in response to changes in pressure) non-invasively in humans using transcranial Doppler ultrasound.

Dr Newell’s research interests have focused on the mechanisms that the brain uses to protect itself against damage from reductions of blood flow and against injury. These studies have included mechanisms of regulation of cerebral blood flow and the use of ultrasound in the diagnosis and treatment of brain disorders. He was the first neurosurgeon in the United States to perform research and publish results on the use of transcranial Doppler ultrasound in neurosurgical patients and helped introduce this technology in the United States as part of the care and treatment of patients with head injury, stroke, and cerebral aneurysms.

While at the University of Washington, Dr Newell directed a basic science laboratory and trained residents and fellows in research methods to study the mechanism of brain damage from stroke. He developed the hippocampal slice culture model for the study of ischemic brain damage and the prevention of neural death. This method utilized organotypic slice cultures, slices of the hippocampus of rat brain that were then grown for weeks in culture. After maturation, these brain slices could then be deprived of oxygen and glucose to mimic stroke conditions and used to test the effect of various compounds to protect the nerve cells from damage.

He was the recipient of multiple National Institutes of Health grants and awards including a clinician scientist investigator award, mid career investigator award, components of a program project in head injury and also a National Stroke Association award. He also served as the clinical principal investigator in the NIH funded, study of magnesium sulfate for neuroprotection after traumatic brain injury that was published in the Lancet Neurology. He was awarded a grant from the Life Sciences Discovery Fund in Washington State to investigate removal of intracerebral hemorrhage using ultrasound catheters. He has published nearly 200 articles and chapters in medical journals and has edited 4 books. He is one of the original authors of the Guidelines for the Management of Severe Traumatic Brain Injury published by the Brain Trauma Foundation in the Journal of Neurotrauma, and surgical guidelines published in Neurosurgery.

Dr. Newell is founder and owner for the Seattle Neuroscience Institute. He is also the co-founder of the Swedish Neuroscience Institute (SNI) in Seattle Washington and served as the co-executive director from 2004-2012. He also served as the Chief of Neurosciences and the Chairman of the board of directors at SNI.  He specializes in the microsurgical treatment of the spine and cerebrovascular systems. He also has specialized expertise in the treatment of cerebral aneurysms, arteriovenous malformations, stroke and carotid surgery, extracranial to intracranial bypass, minimally invasive spine surgery, spine instrumentation, spinal cord tumors, skull base surgery and complex brain tumors, and cyberknife and gamma knife radiosurgery.