Trigeminal neuralgia, also called tic doloureux, is a condition characterized by episodes of intense facial pain that lasts from a few seconds to several minutes. Clusters of attacks can last for several hours.  The pain occurs in areas of the face where the trigeminal nerve supplies normal sensation: cheek, nose, jaw, teeth, gums and lips, and the eye and forehead. This condition causes sudden, sharp and very severe pain, usually only on one side of the face. The pain is described by patients as feeling like stabbing, electric shocks, burning, crushing, exploding or shooting pain. People with this condition may initially experience short, mild attacks, but trigeminal neuralgia can progress, causing longer, more frequent bouts of pain. When severe repeated attacks of pain occur, those affected often have to stop what they are doing, sit down and usually cannot talk to others until the symptoms stop. If left untreated, the condition tends to worsen over time and require increasing doses of medications,  although some patients can undergo spontaneous remission of symptoms over time.  Trigeminal neuralgia  affects women more often than men, and is more likely to occur in people over age 50. 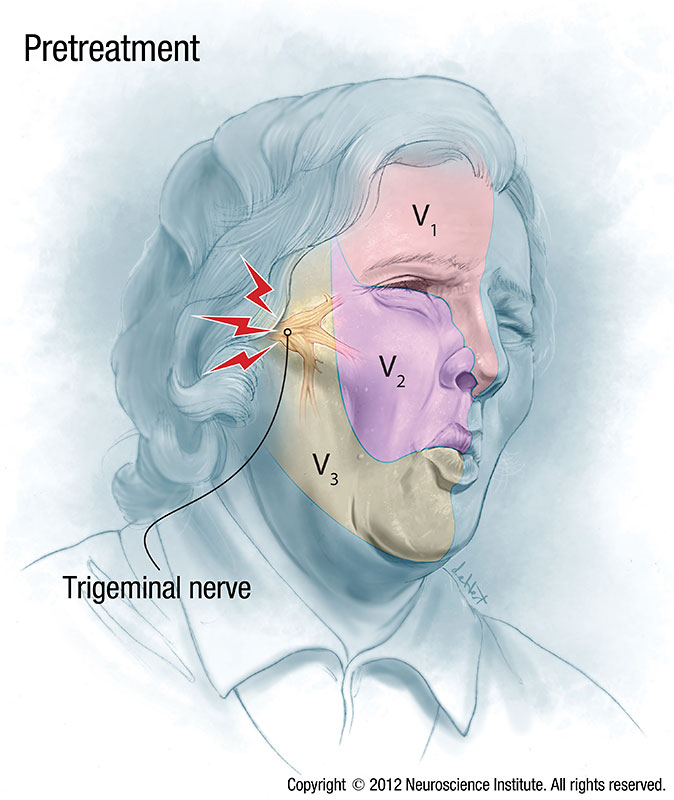 Classic trigeminal neuralgia, or type 1 trigeminal neuralgia, has a number of clinical features.  These include repeated sudden severe episodic pain attacks, which are in the distribution of the trigeminal nerve, restricted to one side of the face. These episodes usually have a trigger zone, or something which provokes the attack such as face washing, chewing, brushing teeth, a cold wind on the face, shaving, or eating.  However, in many patients, the pain is generated spontaneously without any apparent stimulation.  Most patients at the onset of symptoms, are pain free between the sudden attacks, and do not have permanent numbness in the face. Classic trigeminal neuralgia also is initially relieved either partially or completely, by certain anticonvulsant medications. These medications include phenytoin, carbamazepine, oxcarbazepine, gabapentin, and others.  As the condition gets worse, patients can get a component of constant pain that persists in between the severe episodic pain attacks.  If this constant aching or burning pain occurs as the most prominent feature patients are often given a diagnosis of atypical facial pain, or type 2 trigeminal neuralgia.

In addition to the clinical symptom description, imaging studies are also utilized, most commonly high resolution MRI of the brain with and without intravenous contrast, and occasionally head CT.  Even though a vascular compression is the most common cause, it is important to rule out tumor, multiple sclerosis, skull base lesions, infections, sinus pathology, temporomandibular joint, and jaw pathology. The finding of vascular compression of the trigeminal nerve on MRI is not 100% reliable in determining of the cause of symptoms for several reasons.  The current MRI scans in use are not of sufficient  resolution to determine if the nerve is compressed or just lying next to a blood vessel. It also may be difficult to determine if an adjacent blood vessel to the trigeminal nerve is an artery or a vein, and whether or not it is causing irritation and hyperexcitability of the nerve, which is usually the cause of the symptoms.

Trigeminal neuralgia in some cases doesn’t have a specific cause. The most common known causes are conditions that can irritate the trigeminal nerve

Trigeminal is more common in middle-aged and elderly women. The mean age of onset is approximately 40 years old.

Your doctor will ask about your symptoms and medical history. A physical exam will be done. Tests may include:

There are no current guidelines to prevent trigeminal neuralgia.

Medications are used to lessen or block the pain signals sent to your brain, and are the most common initial treatment for trigeminal neuralgia. Some medications include anticonvulsants or antispasmodic agents.

Microvascular decompression is a delicate procedure that is performed through a small opening behind the ear. The goal of this procedure is to prevent a blood vessel from compressing the trigeminal nerve. The surgery is performed under general anesthesia. 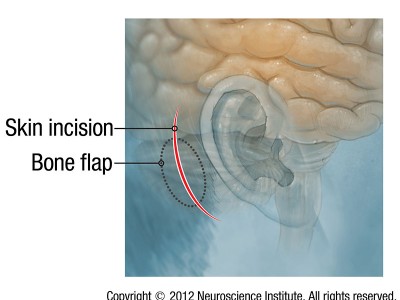 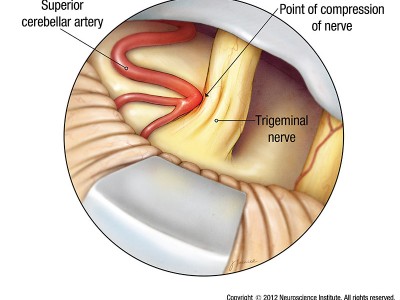 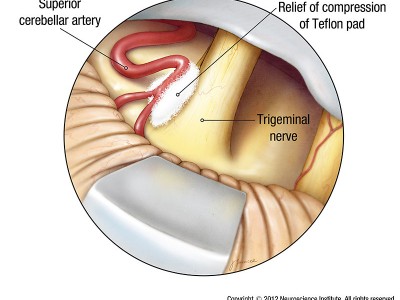 To make sure that other nerves are not damaged by the surgery, the surgeon carefully monitors nerve function of the facial and acoustic (hearing) nerves. This is done by gently inserting tiny electrodes (metal wires that conduct mild electrical signals) into the muscles around the eye and mouth.

Following the decompression procedure, the neurosurgeon closes the bony opening behind the ear, and you will be awakened and allowed to recover from anesthesia. Once this pressure has been relieved, patients often report immediate and complete relief from the pain. Most people stay in the hospital for observation for 2 days after surgery. Pain relief is usually immediate and medications are gradually discontinued over a two- week period following surgery.

The microvascular decompression procedure in patients with classic or type 1 trigeminal neuralgia has been shown to be the most durable treatment over long term follow up in studies that have followed patients for over 20 years. 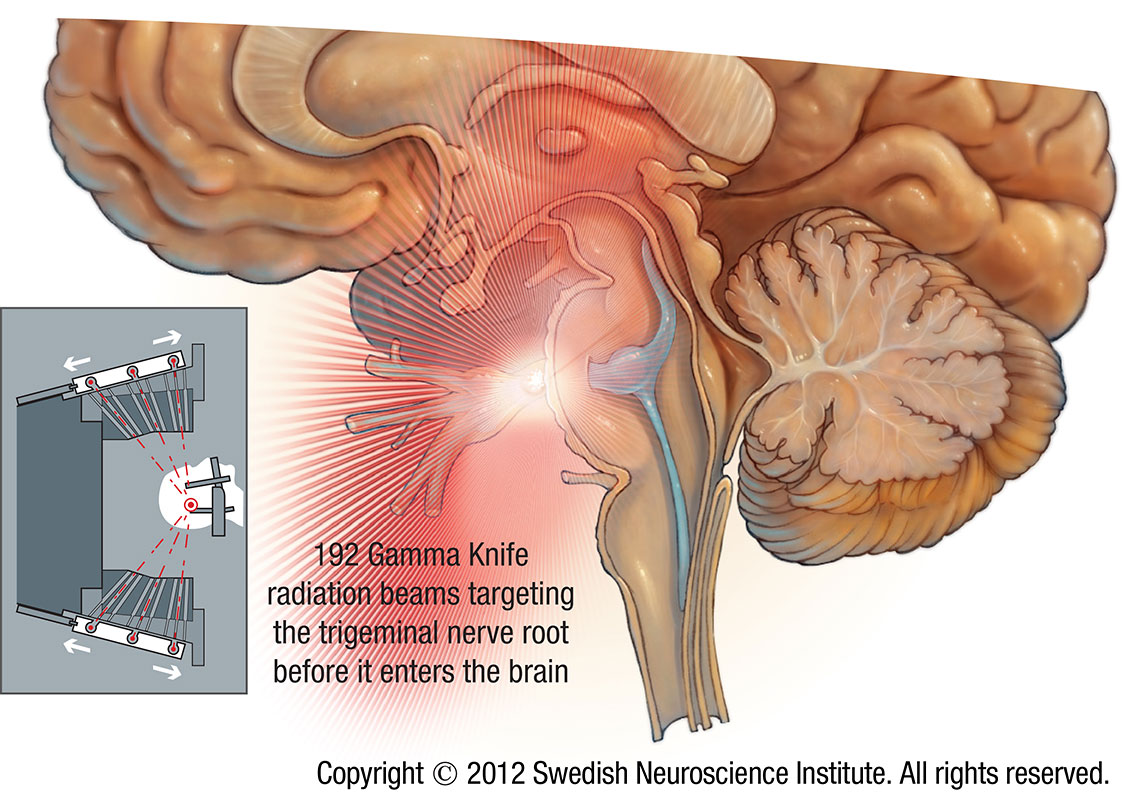 There are certain reasons why Gamma Knife may be a good treatment option to consider.

The Gamma Knife procedure has several steps that occur on one day, including imaging, treatment planning and treatment. The treatment itself takes about one hour.

A unique treatment plan is created for each patient based on images that are taken just before treatment. The plan is used to program the Gamma Knife to send hundreds of beams of radiation from multiple angles and directions at the same time to the precise place where the trigeminal nerve exits the brain. This area is called the nerve root. It is the location of the cause of trigeminal neuralgia.

Alone each of those beams of radiation is not strong enough to damage normal brain through which it travels on its way to the target. Where the beams meet, however, the combined strength is enough to destroy the abnormal cells that case the pain of trigeminal neuralgia.

David Newell, M.D. talks about trigeminal neuralgia, who it affects, and how it’s treated.

For an appointment about pain, symptoms, risks, and treatment contact us or to learn more about your world renown surgeons at Seattle Neuroscience Institute visit our home page.